© Stanley Roseman and Ronald Davis - All Rights Reserved
Visual imagery and website content may not be reproduced in any form whatsoever.

The Humanism of the Italian Renaissance brought a revival of the subject of the nude since Greek and Roman antiquity, and in the following centuries the nude continued to occupy an important place in Western Art.

During the late 1960's and early 1970's, when Roseman was earning his baccalaureate from the prestigious Cooper Union for the Advancement of Science and Art in New York City and his Master of Fine Arts degree from the equally respected Pratt Institute, also in New York City, Abstract Expressionism and Non-Figurative art were the dominant art movements of the time. Going his own way pursuing his career in New York, Roseman was absorbed with the human figure in his work, which included painting and drawing from life the female nude and the male nude.

In a biographical essay on the artist the Bibliothèque Nationale de France commends Roseman for his "innate artistic talent" and states: "Stanley Roseman's drawings show the many facets of his great talents as a draughtsman.''[2] Living in Paris in the 1990's was an opportune time for Roseman to return to the subject of the nude in series of superb drawings.

Page 2  -  Variety of Drawing Materials and the World of Shakespeare

Page 5  -  The Saami People of Lappland 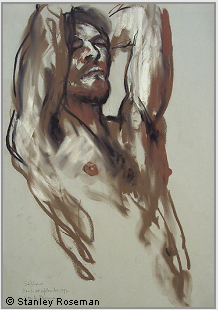 The bold composition of Stéphane, Male Nude with Arms raised, 1997, (fig. 6), brings the torso close to the viewer. Roseman employs a lively interaction of lines and tones in depicting the man's strong, facial features; well-developed musculature; and the textures of his moustache, beard, and body hair on his chest, underarms, and abdomen. With vigorous application of black, white, and bistre chalks, Roseman renders the male figure in strong contrasting light and shade, with reserved areas of gray paper for a mid-tone.

The drawing of Stéphane, with his arms raised, bent at the elbows, and resting behind his head, and the backward lean of his torso, is a sensual depiction of the male nude.

Roseman has devoted much of his professional life to drawing. The artist writes: ''That drawing is considered the foundation of the visual arts nurtured my early convictions as to the importance of drawing and the time spent in my work as a draughtsman."[1] Although drawings have traditionally served as studies or drafts in preparation for compositions to be realized in another medium, drawings can be autonomous works of art, as are Roseman's drawings. The artist's signature on a drawing, as well as his dating a drawing, confirms the artist's intention that the drawing is a work complete unto itself.

A New Yorker in his late twenties is the subject of the excellent drawing Standing Male Nude, 1974, (fig. 3), rendered in bistre, red, and white chalks on gray paper. With sculptural modeling of the chalks, Roseman describes the muscular physique of the man seen from the back, his hands on his hips and his face in profile. The moustache and dark hair complement the chiaroscuro of cool highlights and warm shading on the figure.

Rosaline's fair skin is enhanced in the drawing by warm shading on the face and figure. Tones of bistre chalk in the background place the seated figure in pictorial space and heighten the presence of the individual in this intimate composition.

With a painterly use of the chalk medium, the artist has beautifully expressed the female form and the engaging personality of the sitter. In this fine drawing, Roseman presents a seductive image of the female nude.

Roseman has made use of the classical sculptural scheme of contrapposto - from the Italian, suggesting opposing movement - whereby the standing figure rests on one leg while the other is bent at the knee, which causes an adjustment in the dispersal of body weight, as seen in the drawing presented here. The drapery alludes to Greek sculptures, such as the Venus de Milos, the Aphrodite (Venus) of Arles, and the Venus of Capua, of which drapery covers the lower half of the nude figure.

In this fine chalk drawing of Colette, Roseman combines elements in art from classical antiquity and the modern age and creates a striking visual impression of the female nude.

The Drawing Medium of Chalk

In Western art, the use of chalks for drawing dates from the fifteenth century. Roseman writes about the medium of which a brief excerpt is quoted here:

"Chalk generally refers to two kinds of drawing materials whose graphic identities are closely related. When chalk came into use as a drawing medium in the fifteenth century, the word 'chalk' referred to a soft stone cut into sticks. Black chalk, a natural carbon with a proper consistency of clay to earth pigment, 'comes from the hills of France,' notes Vasari in his Introduction to his Lives of the Artists. Red chalk, or sanguine, was cut from hematite. Vasari describes red chalk as 'a stone coming from the mountains of Germany' and further mentions that 'the stone be soft enough to be easily sawn and reduced to a fine point suitable for marking on leaves of paper.'[3] White chalk was obtained from steatite (tailor's chalk), gypsum, or limestone.

"In the sixteenth century, a manufactured black chalk made of fine lampblack and molded into sticks produced a denser, more velvety tone with less sandy particles than from stone chalk. Red and white earth pigments ground with an admixture of a binder were also made into sticks for drawing. Brown chalk was similarly made. Manufactured chalks are the standard chalks for drawing in use today."

Light falls on Ron's forehead, chest, left shoulder and arm, back, and buttocks. The combination of parallel hatching and blended passages of the chalks in describing the figure is repeated in the background of bistre and white chalks, with reserved areas of the gray paper. The artist has effectively rendered the perspective of the left arm and elbow extending forward in pictorial space. A consummate draughtsman, Roseman has created a sensual depiction of the male nude. 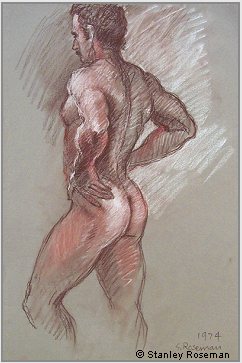 Roseman's painterly use of the chalk medium is again exemplified in the drawing below, (fig. 7), of a young, muscular Frenchman named Christophe.

With arms raised, bent at the elbows, and placed together behind the right side of his face, Christophe is seen nude and standing in profile. Roseman draws the torso, genitalia, and left buttock and thigh with strong chiaroscuro modeling of cool lights and warm shading on gray paper. The Frenchman's head is inclined forward; his abundant brown hair falls to his shoulders. 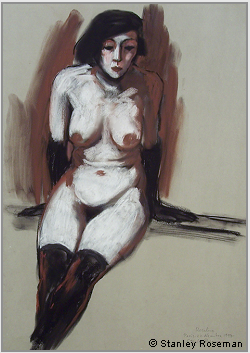 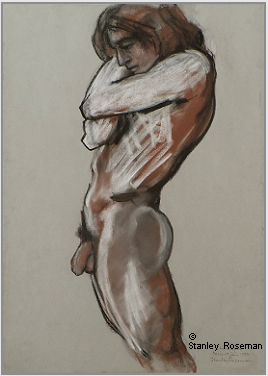 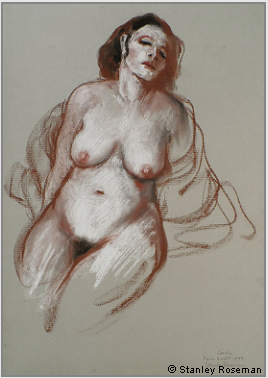 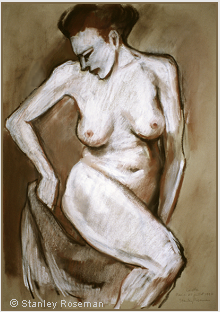 Christophe, standing Male Nude in Profile, 1997, is an arresting composition with the figure placed in the center of the page. Roseman's consummate draughtsmanship combines dynamic interplay of linear description, vigorous strokes of the chalks, and the blending of the chalks to describe the athletic male's physique.

Colette, Female Nude with Drapery, 1997, (fig. 4, below), complements luminous, pale skin tones of the female figure with a warm, summary background and the grayish-brown cloth that Colette holds in her hands. Roseman places the figure parallel to the picture plane. The woman's head is lowered and turned sharply to the side, her face in profile, her auburn hair swept upwards. The angularity in the position of her limbs is reminiscent of drawings of the female nude by Rodin and Matisse.

"The presence of the model is a generative force to the creation of my work," writes Roseman in a text on drawing.(4)  The artist's drawings of the male and female nude have an immediacy of expression, a sensuality, and a presence of the individual.

Carole, an attractive, brunette Parisienne, also modeled for the artist in his studio in Paris.

Roseman drew Carole, seated Female Nude, 1997, (fig. 8), with a harmony of curvaceous forms of the figure complemented by the diaphanous drapery that falls around the woman's shoulders, arms, and back. The artist has finely rendered the pale-pink flesh tones with luminous highlights and soft shadows on Carole's neck and shoulders, her ample breasts, and the curves of her stomach and hips in contrast to the dark triangle of her feminine sex.

A prolific draughtsman, Roseman employs a variety of drawing materials to express a diversity of subjects and themes. Chalk is a medium the artist prefers for several subjects, including the nude as in the selection presented on this page. Three drawings are from the artist's private collection and exhibited for the first time.

Carole leans to the side, her face turned upward, her eyes closed, and her red lips slightly parted. Her dark brown hair is brushed back and frames her face; a ringlet falls against her right cheek. In this beautiful drawing, Roseman has created an alluring image of the female nude. 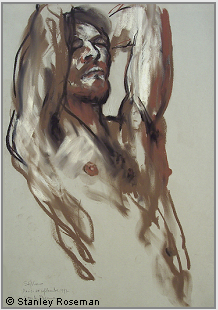 Jenny, Seated Female Nude, seen at the top of the page, (fig. 1), is rendered with bistre lines and tones, pearly gray shading, and pinkish-white flesh tones on gray paper. Fluent lines describe the drapery that partially covers the figure and suggestively reveals her feminine sex. Jenny sits with head inclined and eyes downcast, a pensive expression on her lovely face in this beautiful drawing of the female nude. 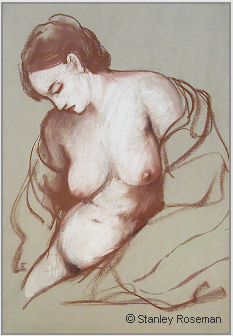